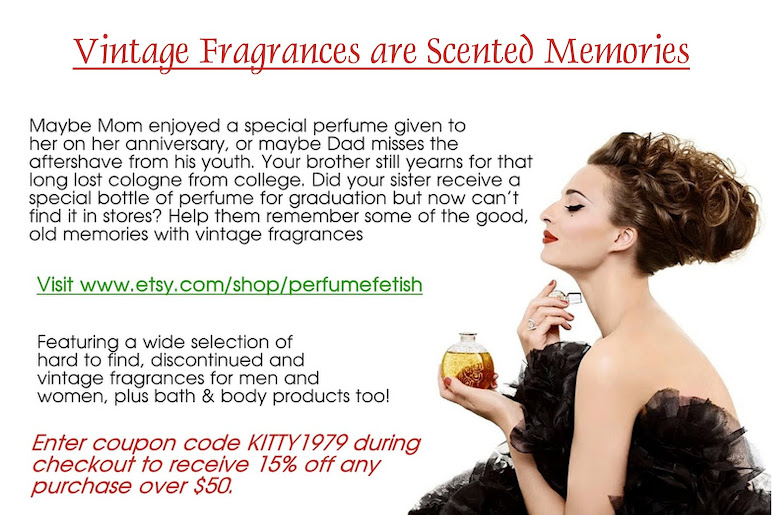 The sisters were famous for their usage of antique laces, ribbons and textiles during their early years as well as the popular oriental style adapted by Paul Poiret during the 'teens and 'twenties incorporating silver and gold lame. 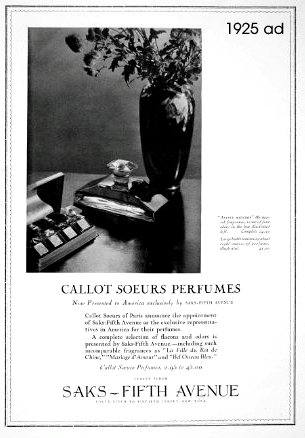 The business owners dwindled one by one through deaths and retirement until it was ran single handed by Marie Callot Gerber for seven years, and like other fashion designers of the period, the company introduced perfumes in 1923. Flirting with the themes of orientalism and cubism, the styles were reflected in their perfume names and their flacons.  La Fille du Roi de Chine (daughter of the king of China) is a perfect example.

Other names were reminiscent of fashions. The perfume La Cabine des Mannequins, means "the fitting room", while La Châle Indien means "the Indian shawl", Bao is Vietnamese for "purse". 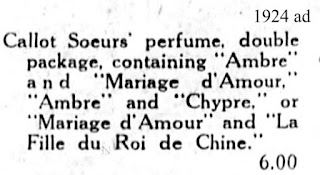 On the death of Marie Callot Gerber in 1927, her two sons Jacques and Pierre were left in charge, however, the company was hit hard by the stock market crash of 1929 and the business was absorbed by Calvet in 1937. Their fragrances were available for sale until the early 1950’s.


"Callot has sets of five different perfumes, attractively boxed, $12.50; sets of eleven, $22.50. She can take her pick and get one big bottle next year." 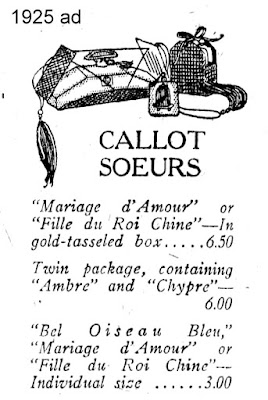 The perfumes of Callot Soeurs: 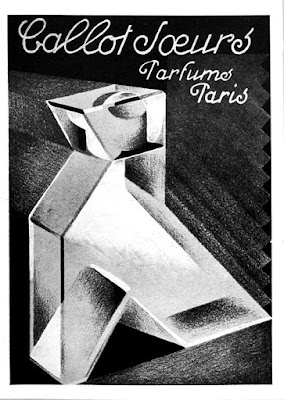 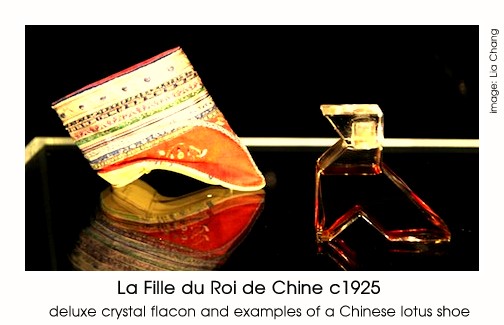 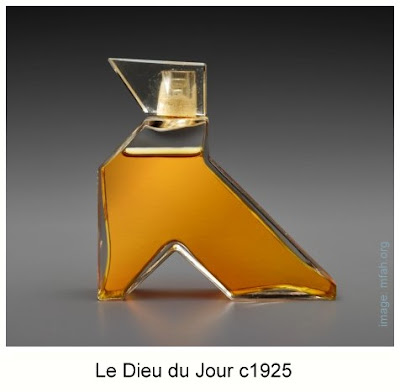 Callot Soeurs had a knack for mixing styles to become artful and pleasing presentations for their perfumes, especially the sultry orientalism and avant garde cubism which was very trendy during the 1920s. The deluxe perfume bottle for La Fille du Roi de Chine was a cubist style clear crystal flacon in the shape of a shoe, it's fanciful shape recalls the Chinese lotus shoe used for centuries to hold the legendary bound foot of a woman. A lesser expensive bottle was simply shaped like a Chinese snuff bottle, made of clear glass and topped with a green glass button stopper. The fragrance of La Fille du Roi de Chine was a woody oriental fragrance for women with a distinctive leather chypre accord. The bottle was also used for the perfume Le Dieu du Jour. 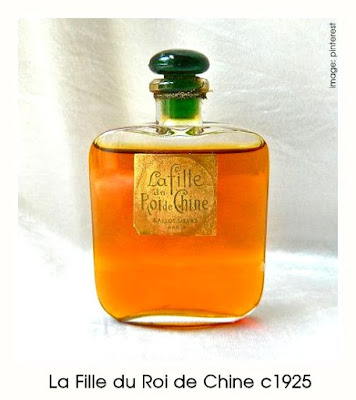 For the perfume Bel Oiseau Bleu (Beautiful Blue Bird), a somewhat expression of loneliness and romanticism was presented in the form of a simple bottle with enamelled decorations depicting an empty cage on the front and a blue bird on the back. The flacon was designed by Lucien Gaillard. This is the same bottle used for the lesser expensive example for the perfume Bel Oiseau Bleu. 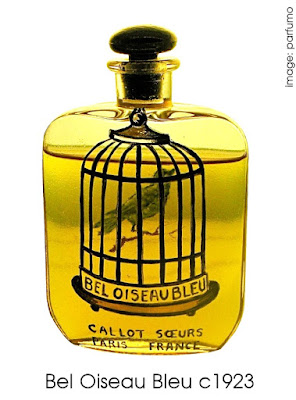 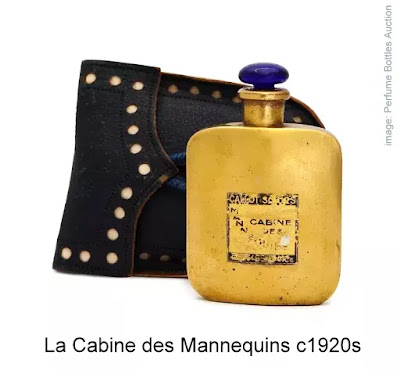 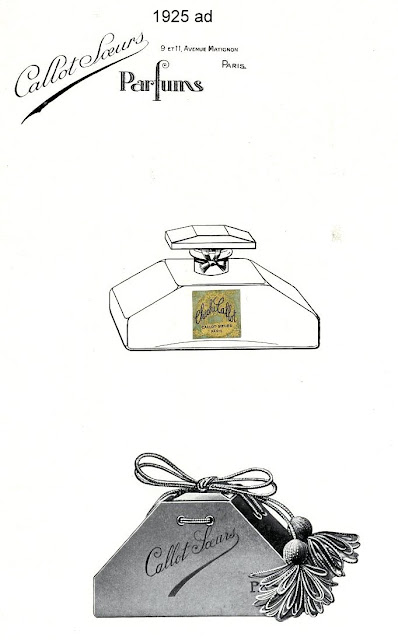 The perfumes ultimately remained a sign of the times during the 1940s, with the perfume Jeep, it's bottle displayed a frosted glass stopper molded with the wheel of the wartime vehicle. Its presentation box features an embossed image of an early style of the Jeep. The bottle was designed by Lucienne Coudert. 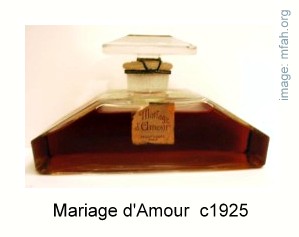 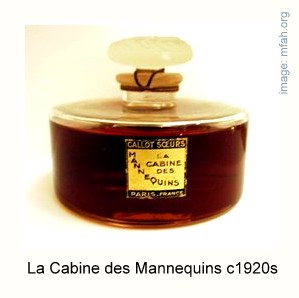 The perfume Mariage d'Amour was scented with lilies, it's bottle boasted a frosted glass stopper molded with Cupid's bow and quiver holding arrows of love. This bottle too, was designed by Lucienne Coudert.

The perfumes for Bao and Dieu du Jour were housed in the same flacon, a tall square bottle topped by a frosted glass stopper molded with two simple scrolling motifs. Designed by Pierre Camin. 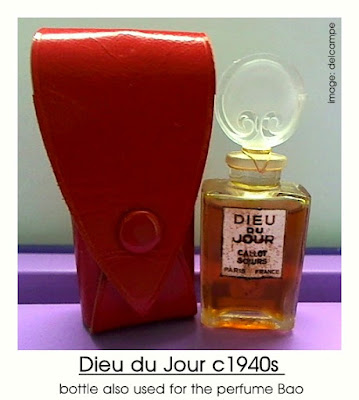 All comments will be subject to approval by a moderator. Comments may fail to be approved or may be edited if the moderator deems that they:
contain unsolicited advertisements ("spam")
are unrelated to the subject matter of the post or of subsequent approved comments
contain personal attacks or abusive/gratuitously offensive language

Want to join? Ask Me!

Please visit our friends at